Topographic map of Hungary with highways 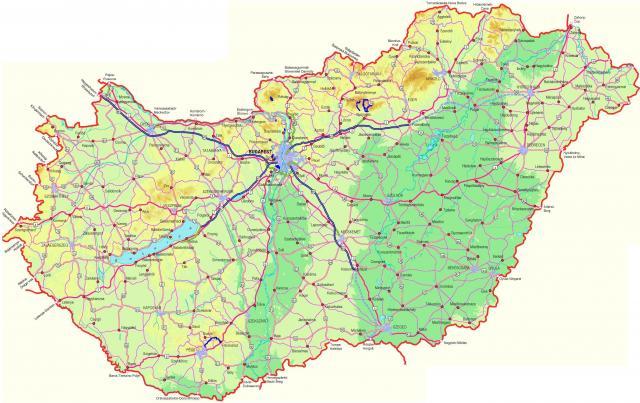 You will find more maps here!

Map is a representation, usually on a plane surface, of a region of the earth or heavens.

It is a visual representation of an area — a symbolic depiction highlighting relationships between elements of that space such as objects, regions, and themes.

Cartography or map-making is the study and practice of crafting representations of the Earth upon a flat surface (see History of cartography), and one who makes maps is called a cartographer.

Road maps are perhaps the most widely used maps today, and form a subset of navigational maps, which also include aeronautical and nautical charts, railroad network maps, and hiking and bicycling maps. In terms of quantity, the largest number of drawn map sheets is probably made up by local surveys, carried out by municipalities, utilities, tax assessors, emergency services providers, and other local agencies. Many national surveying projects have been carried out by the military, such as the British Ordnance Survey (now a civilian government agency internationally renowned for its comprehensively detailed work).

On the picture we can see the topographíc map of Hungary.

A topographic map is a two-dimensional representation of a three-dimensional land surface. Topographic maps are differentiated from other maps in that they show both the horizontal and vertical positions of the terrain. Through a combination of contour lines, colors, symbols, labels, and other graphical representations, topographic maps portray the shapes and locations of mountains, forests, rivers, lakes, cities, roads, bridges, and many other natural and man-made features. They also contain valuable reference information for surveyors and map makers, including bench marks, base lines and meridians, and magnetic declinations. Topographic maps are used by civil engineers, environmental managers, and urban planners, as well as by outdoor enthusiasts, emergency services agencies, and historians.