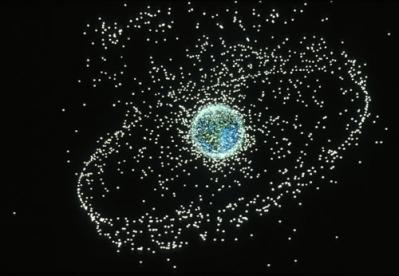 Space debris is the collection of defunct objects in orbit around Earth. This includes everything from spent rocket stages, old satellites, fragments from disintegration, erosion, and collisions. Since orbits overlap with new spacecraft, debris may collide with operational spacecraft.

Most space debris is less than 1 cm (0.39 in), including dust from solid rocket motors, surface degradation products such as paint flakes, and coolant released by RORSAT nuclear-powered satellites. Impacts of these particles cause erosive damage, similar to sandblasting. Damage can be reduced with "Whipple shield", which, for example, protects some parts of the International Space Station. However, not all parts of a spacecraft may be protected in this manner, e.g. solar panels and optical devices (such as telescopes, or star trackers), and these components are subject to constant wear by debris and micrometeoroids. The flux of space debris is greater than meteroids below 2000 km altitude for most sizes circa 2012.

Safety from debris over 10 cm (3.9 in) comes from maneuvering a spacecraft to avoid a collision. If a collision occurs, resulting fragments over 1 kg (2.2 lb) can become an additional collision risk.

As the chance of collision is influenced by the number of objects in space, there is a critical density where the creation of new debris is theorized to occur faster than the various natural forces remove them. Beyond this point, a runaway chain reaction may occur that pulverizes everything[not verified in body] in orbit, including functioning satellites. Called the "Kessler syndrome", there is debate if the critical density has already been reached in certain orbital bands. A runaway Kessler syndrome would render the useful polar-orbiting bands difficult to use, and greatly increase the cost of space launches and missions. Measurement, growth mitigation and active removal of space debris are activities within the space industry today.