The soil of Hungary

Source of the photo
c
Author of the description
GK 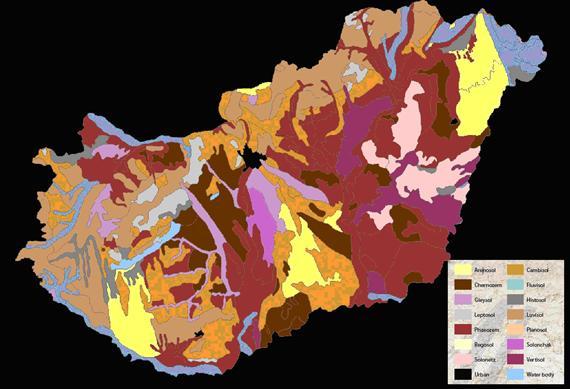 Soils are amongst the most important natural resources of Hungary. The favourable landscape, climate and soil conditions allowed the original Hungarians to settle in the Carpathian Basin. When looking at the soil map of Hungary, the various colours reflect how differences in environmental factors have determined the development of the soil cover.

In hillier or mountainous areas, higher precipitation and lower temperatures lead to the development of soils under forest vegetation. These fertile soils, known as uvisols, were heavily influenced by percolating water which led to the accumulation of clay in the subsoil.

In the area between the mountains and the Hungarian Great Plain, young soils without distinct profile development are found (Cambisols). In lowland areas, one can find dark Chernozems, the most fertile soil of Hungary that supports the country’s agricultural production  (see adjacent poster for more details). Soils in river valleys that have developed on stratified sediments are called Fluvisols. Arenosols, soils that have developed on windblown sands deposited after the end of the last ice age, are extensive in certain parts of the country. In certain situations, ground water containing soluble salts can be found close to the surface. If evaporation is higher than precipitation, then saltaffected soils such as Solonchaks and Solonetzs can be found.

The soils of Hungary have been used very intensively throughout history for the cultivation of crops, for animal grazing and supporting woodlands for construction material. Currently, 48% of land is used for crops (mostly wheat and corn), 21% are forests, 8% are grasslands and 20% is uncultivated.

The major limitation to agriculture in Hungary is precipitation. Climate change models predict that Hungary will experience extreme precipitation events in the future. The greatest challenge is to store the rainfall within the soil through effective soil management practices. Such techniques will control erosion, minimise the loss of topsoil and maintain or even enhance organic carbon and the bio-diversity levels of the soils.

THE SOILS OF HUNGARY - The European Soil Bureau Network and the Hungarian Soil Science Society, http://eusoils.jrc.ec.europa.eu/awareness/Documents/EU_Presidency/poster1_en.pdf