Author of the description:
Gruiz, Katalin 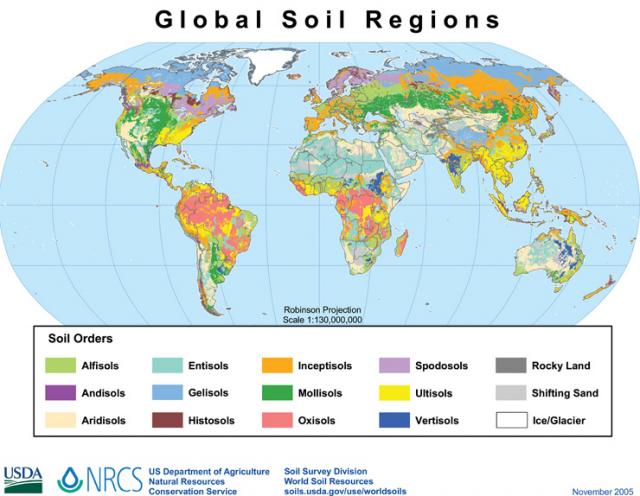 The map shows the orders of soil and their Global occurence.

In the United states 12 soil orders are defined. In 1975, Soil Taxonomy was published by the United States Department of Agriculture's Soil Survey Staff. This system for classifying soils has undergone numerous changes since that time, and the 2nd edition was published in 1999. Soil Taxonomy remains one of the most widely used soil classification systems in the world.

At the highest level, Soil Taxonomy places soils in one of 12 categories known as orders: the 12 soil orders are listed below in the sequence in which they key out in Soil Taxonomy:

The World Reference Base (WRB) ensures the uniform classification of soils all around the world.

WRB was originally an initiative of FAO and UNESCO, supported by UNEP and the International Society of Soil Science which dates back to 1980. The intention of the project was to work towards the establishment of a framework through which ongoing soil classification could be harmonized. The final objective was to reach international agreement on the major soil groups to be recognized at a global scale as well as on the criteria and methodology to be applied for defining and separating them.

Such an agreement was meant to facilitate the exchange of information and experience, to provide a common scientific language, to strengthen the applications of soil science and to enhance the communication with other disciplines. Several meetings of the ISSS subgroup were held starting in 1982 in New Delhi. In 1992, in Montpellier, France, it was decided that there was no justification to develop a completely new classification system very different from the Revised Legend published by FAO in 1988. Therefore the FAO Revised Legend was to be adopted as the Framework for WRB’s future work and that it would be the task of the working group to further develop its definitions and linkages to the existing FAO units, in order to give them more depth and validity.

Soils of the Earth