Author of the description:
Gruiz Katalin 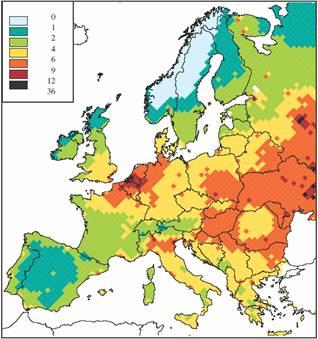 The map on the picture shows the loss of life in month in Europe due to Particulate Matter (PM) pollution in air. This map shows the statistics of 2000, the next map shows a much higher predicted value for 2020 (in spite of taking a more strict regulation into consideration).

Human activities, such as the burning of fossil fuels in vehicles, power plants and various industrial processes also generate significant amounts of aerosols. Averaged over the globe, anthropogenic aerosols currently account for about 10 percent of the total amount of aerosols in our atmosphere.

It is a science based fact that there is close correlation between PM pollution and allergies, asthma and other health problems of the respiratory system. The most risky grain size is 2.5 micron and less, because these very small particles are able to get into the depths of the lung and are not able to leave it. Increased levels of fine particles in the air are linked to health hazards such as heart disease, altered lung function, COPD and lung cancer.

According to the assessment of Clean Air For Europe, (CAFE) about  300 000/year people die in consequence of PM2.5 in air.